Escherichia coli Recombinant is one of the organisms of choice for the production of recombinant proteins. Its use as a cell factory is well established and has become the most popular expression platform. For this reason, there are many molecular tools and protocols available for the high-level production of heterologous proteins, such as a wide catalogue of expression plasmids, a large number of engineered strains, and many breeding strategies. We review the different approaches to recombinant protein synthesis in E. coli and discuss recent progress in this ever-growing field.

The choice of strains used to express recombinant proteins also plays an important role in protein expression, solubility, and yield. Some strains of E. coli such as BL21 and its derivatives are widely used. Different strains of E. coli facilitate the expression of proteins that contain disulfide bonds or those that are encoded by genes that contain rare codons and proteins that are toxic to E. coli. Furthermore, co-expression with some genes enhances the expression of post-translationally modified proteins. To date, several E. coli strains have been engineered that greatly enhance membrane protein production.

BL21 and its derivatives are commonly used for the production of recombinant proteins in E. coli. These strains are deficient in the Lon and OmpT proteases, which can increase protein stability. Strain BL21(DE3) contains a chromosomal copy of the T7 RNA polymerase gene for the simple and efficient expression of genes under the control of the T7 promoter. BL21Star(DE3) contains a mutation in one, the gene that encodes RNase E, and therefore the use of BL21Star(DE3) increases mRNA stability and protein expression.

BL21trxB, a derivative of BL21(DE3), harbours a thioredoxin reductase (text) mutation, and the Origami(DE3) strain contains mutations in both text and the gene encoding glutathione reductase (or), which markedly improves the formation of disulfide bonds in the cytoplasm. 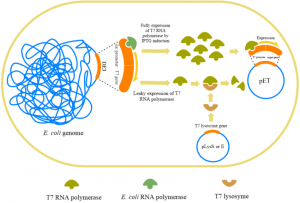 In E. coli, phosphorylation of a target molecule (a mouse or human protein) has been achieved by co-expression with the human Jun N-terminal kinase 1. Protein glycosylation is another important post-translational modification that substantially affects protein stability, distribution, and function.

The discovery of N-linked protein glycosylation in Campylobacter jejuni and the functional transfer of this glycosylation system to E. coli enabled the production of recombinant glycoproteins in bacteria, although bacterial N-glycans differ structurally from their eukaryotic counterparts. Glycoconjugate vaccines can be produced in E. coli using this strategy. Furthermore, bacterial N-linked glycosylation occurs in scFv antibody fragments and improves biophysical properties.

Most targeting and translocation of membrane proteins occurs via a universally conserved signal recognition particle (SRP)/secretory (Sec) pathway. SRP-nascent chain ribosome complexes contact the SRP FtsY receptor on the membrane and thus mediate transfer of the nascent chain to the Sec translocon. 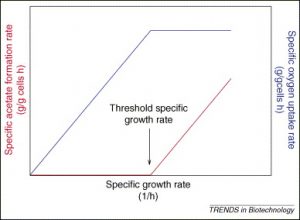 Transfer of the complex to the Sec pore is driven by hydrolysis of SecA and ATP. The SecDFYajC complex also plays a critical role in the biogenesis, translocation, and folding of membrane proteins. Saturation of the translocon pathway during overexpression of membrane proteins can cause the accumulation of cytoplasmic aggregates and extensive perturbations in the proteome.

Two strategies have been employed to solve this problem: (i) adjustment of transcription and translation rates and (ii) co-expression of biogenesis factors. Strains C41(DE3) and C43(DE3), also known as Walker strains, are derivatives of BL21(DE3) that harbour mutations in the lacUV5 promoter, which influences the expression levels of T7 RNA polymerase.

It was also shown that a mutation in the lac repressor LacI is crucial for promoting tolerance to overexpression of membrane proteins. The subsequent production of comparatively lower amounts of target proteins in the Walker strains ensured that the Sec translocon did not become saturated with the proteins produced.

Lemo21 (DE3) can be tuned for overexpression of membrane proteins, and the amount of membrane protein produced can be easily regulated by exploiting the Sec-translocon capacity of E. coli. In Lemo21(DE3), T7 RNA polymerase activity can be precisely regulated by expressing T7 lysozyme under the control of the l-rhamnose promoter and then modulating the level of the target protein by adding 0–2 mM l-rhamnose to the culture.

A complementary approach to reducing protein expression involves increasing the amount of protein biogenesis machinery. Co-expression of the DnaK/J cytoplasmic chaperone system, which functions in protein targeting and folding, enhanced the production of the magnesium transporter Cora.

In addition, co-production of the protease FtsH, a membrane-bound quality control factor, markedly improved the yields of G protein-coupled receptors. However, most efforts employing this strategy have been unsuccessful. For example, co-expression of membrane protein biogenesis factors (SRP/FtsY, SecA) and other factors with Cora or G protein-coupled receptors did not enhance target protein production.

Both the composition of the culture media and the culture conditions are important for protein expression. Luria broth (LB) medium is easy to prepare and is the most widely used medium for growing E. coli. However, the growth of E. coli on LB stops at a relatively low density, because it contains low amounts of carbohydrates and divalent cations. 2X yeast extract tryptone, excellent broth and super broth can also be used and have been shown to be superior to LB in achieving higher cell densities.

As cell density increases, oxygen can limit E. coli growth and protein expression in batch cultures; Additional agitation can be generated by the use of high agitation speeds, agitation in a baffled flask, and oxygen-enriched air or pure oxygen. It is also possible to avoid inclusion body formation by optimizing cell culture conditions. Protein expression in E. coli at 15-25°C is commonly induced to increase the solubility of recombinant proteins, and the induction temperature can be lowered to 6-10°C.

Uncontrolled pH culture conditions favour aggregation of recombinant proteins, but a stable pH can be maintained by the use of buffers or by automatic addition of base or acid. The addition of cofactors or binding partners required for protein folding to the culture medium will improve protein solubility and prevent inclusion body formation.

Alternatively, the addition of a mild detergent such as Triton X-100 in shake flasks can improve the solubility and secretion ratio of the aggregation-prone protein. In conclusion, the composition of the media and the culture conditions are critical factors to optimize the expression of recombinant proteins. Although this is mostly achieved by trial and error, it can be beneficial.

In contrast to the IPTG induction method, autoinduction was introduced as a convenient method to produce recombinant proteins without the addition of inducers on a small laboratory scale for expression systems controlled by the lac operon. Autoinduction medium contains glycerol, lactose, and glucose at optimized levels, with glycerol used as the carbon source. Lactose is metabolized by autoinduction once glucose is depleted.

Therefore, there is no need to monitor growth, minimizing operator intervention from inoculation to cell harvesting, which is preferable in high-throughput experiments. In addition, there is tighter control of protein induction, improving the expression of toxic proteins.

Another advantage of autoinduction is that the medium allows cultures to reach high cell densities and generally produces a higher proportion of soluble target proteins than IPTG-induced expression. A disadvantage of autoinduction is that the medium is negatively affected by the level of aeration. This can be overcome by using a glucose-fed batch medium, which attenuates oxygen sensitivity and provides robust high-yield expression under high aeration rates.